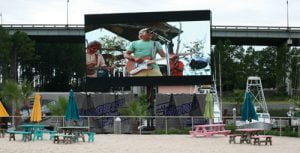 When tropical storm Alex forced the postponement of a Gulf Shores charity concert to benefit victims of the BP oil spill, LuLu’s was left without an act to entertain the large crowds expected on June 30 and July 1. Fortunately, when your name is Lucy Buffett, you’ve got an ace up your sleeve. Lucy convinced her brother, Jimmy Buffett, to make an impromptu, surprise appearance with his Coral Reefer Band at her harbor-side restaurant and bar on June 30.

This was no lazy day in Margaritaville – special accommodations for staging, video, sound and other logistics were made last minute to enable the legendary performer to do what he does best. BSUN Media was contacted, assigned to the job and the resourceful company, willing to jump through hoops, helped pull off an event that, thanks to frenzied alerts on Twitter and other social media, soon drew thousands to LuLu’s.

Another key ingredient was “GoBigger” – the world’s largest mobile LED video screen. The massive 19’ x 33’ unit, featuring Daktronics HD-16 LED video technology, was provided by GoVision (www.jumbo.tv), one of the nation’s premier suppliers of turnkey mobile LED units and customized modular LED walls. GoVision’s technicians worked with BSUN Media to float the 53’ trailer-mounted unit on a barge just off the dock – another impressive feat of ingenuity – and integrated the screen into LuLu’s audio and video systems.

“It all came together smoothly thanks to an outstanding group effort,” said Brad Sundberg, owner of BSUN Media Systems (www.bsunmedia.com). “LuLu’s staff, the Buffett crew and the BSUN team worked together to pull this show off virtually overnight, and GoVision’s flexibility and technical support were huge contributors to our success.”

“You might think we bent over backwards on this event because it was a Jimmy Buffett show,” said Chris Curtis, CEO of Argyle, TX-based GoVision. “But the truth is, we didn’t know who was performing until the eleventh hour. We’ve made a name for ourselves over the years as client-service specialists, and I think we earned a couple more gold stars on this job.”

The charity concert, Jimmy Buffett & Friends: Live From the Gulf Coast, finally went off on July 11 a mile down the road, and was simulcast back to LuLu’s on another giant screen. Since GoBigger was already booked, GoVision sent the next-best-thing – its 9’ x 16’ “GoBig” unit, also using Daktronics LED video technology.

The show, carried live on the CMT network and CMT.com, featured a Parrothead’s delight of greatest hits, along with guest performances by singer-songwriter Jesse Winchester and New Orleans music legend Allen Toussaint.

“As I said in my newsletter,” said Sundberg following the event, “if we at BSUN Media Systems can float a 33′ HDTV on a barge and have it online in seven days for a secret Jimmy Buffett concert, is there really anyone else you should consider calling if you need a 50″ plasma installed in your family room?’”.

GoVision L.P. (www.jumbo.tv) provides affordable day or night, larger-than-life video broadcast for outdoor and indoor events nationwide through state-of-the-art LED walls and a fleet of custom-built mobile units. Its fleet ranges from GoBigger, the world’s largest mobile high-definition LED screen, to GoTron, a 9’ x 12’ screen perfect for events with smaller crowds and budgets, and everything in between. GoVision boasts the world’s largest inventory of Daktronics 12HD modular rental equipment. The company has had a prominent role in countless national events, including the 55th (Bush) and 56th (Obama) Presidential Inaugurations, the Breeders’ Cup, Olympic Torch Relay and Lance Armstrong’s Ride for the Roses. The Argyle, Texas-based company is the screen provider of the NCAA Final Four, Texas Motor Speedway, Dallas Cowboys Stadium, the University of Oklahoma and San Jose State football teams, and several PGA tournaments.

Daktronics is recognized as the world’s leading provider for full-color LED video systems. Such Daktronics systems, used in both modular and fixed-installation applications, feature a host of patented manufacturing, image processing and control system techniques and technologies that provide it a significant competitive advantage in the LED video marketplace. Since 2001, independent market research conducted by iSuppli Corp. lists Daktronics as the world’s leading provider of large screen LED video display systems. For more information, visit the company’s Web site at http://www.daktronics.com.

Cautionary Notice: In addition to statements of historical fact, this news release contains forward-looking statements within the meaning of the Private Securities Litigation Reform Act of 1995 and are intended to enjoy the protection of that Act. These forward-looking statements reflect the Company’s expectations or beliefs concerning future events. The Company cautions that these and similar statements involve risk and uncertainties which could cause actual results to differ materially from our expectation, including, but not limited to, changes in economic and market conditions, management of growth, timing and magnitude of future contracts, and other risks noted in the company’s SEC filings, including its Annual Report on Form 10-K for its 2009 fiscal year. Forward-looking statements are made in the context of information available as of the date stated. The Company undertakes no obligation to update or revise such statements to reflect new circumstances or unanticipated events as they occur.