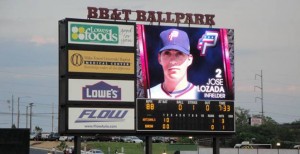 The Winston-Salem Dash opened their inaugural season at BB&T Ballpark in downtown Winston-Salem, N.C. this past spring with an integrated video, scoring and advertising display system from Daktronics Inc. (Nasdaq-DAKT) of Brookings, S.D.

“The new displays bring a clarity and crispness to our in-game presentation that is top of the line. Everything from game footage to video clips to in-game skits that ends up on our board is presented so clearly that it appears to be in high definition,” said Trey Kalny, Director of Game Entertainment. “The new displays have enhanced our fans’ experience to the umpteenth degree by bringing them a closer, clearer action of what’s happening on the field. The stadium itself is cozy and fan-friendly but the board brings our fans right into the middle of the action. It truly is one of the best boards I have seen at any sporting or entertainment venue.”

The centerpiece of the system is a large 40-foot wide by 27-foot high LED (light emitting diode) video display soaring over the right field fence. The video board can operate as an independent display showing single large images or be divided into multiple zones (windows) to show a wide variety of statistics, information, graphics, animations and live and recorded video. Dash fans are also informed of game in progress information by a reliable Daktronics scoreboard complete with low power, high brightness LED digits and programmable team name displays.

Incorporated into the outfield fence in left field, Daktronics provided a digital LED fence display measuring approximately 184 feet wide. This unique LED fence display offers additional information and entertainment such as full-color crowd prompts, advertisements, up-to-the-minute scores and statistics and video clips on an impact-resistant screen. The new fence display is one of only a handful in minor league baseball and rivals that of many displays in Major League Baseball ballparks.

The integrated system continues outside the new ballpark with a full-color marquee display greeting, informing and entertaining spectators arriving at the ballpark.

With Daktronics powerful and complete control package, the new displays will all integrate seamlessly to provide a dynamic informational network to BB&T Ballpark.

The Winston-Salem Dash are a class A minor league affiliate in the Carolina League of the Chicago White Sox. The Dash opened new BB&T Ballpark in April 2010. Recently BB&T Ballpark was named 2010 Ballpark of the Year by Baseballparks.com. The website presents the annual award to the new stadium with the best combination of design, seat selection and fan amenities.