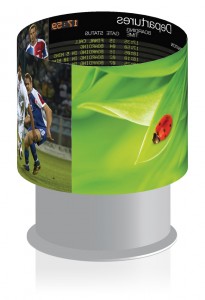 The 360° display of the Litefast MOTION models is divided into three 120° screens, each of which can now show different content. While one third of the overall 360° LED display is showing commercials, movie trailers, or music videos, the other two can be present any desired still images such as digital posters, flight or train schedules, or program information.

The new Multi-Screen feature of the Litefast MOTION displays brings digital signage to life. The attention of customers and passers-by is captivated by the unusual appearance of the 360° displays, the eye-catching presentation, and the intriguing combination of useful information, advertising, and entertainment. The Multi-Screen function also opens up additional lucrative opportunities to sell advertising time on Litefast MOTION displays.

Multi-Screen presentations can be flexibly created with the Litefast Media Player which is integrated in the pedestal of the Litefast MOTION display. After uploading video and image files to the Player’s hard drive via USB, Ethernet or WLAN, you can mix and combine them to create playlists. Special macros assign content to the three parts of the 360° display and determine how often the motifs or scenes change. The finished playlists can also be scheduled for automatic timed playback. This lets you design an endless variety of digital signage shows tailored to different target groups, with dynamically changing videos and still frames on the three screens of the Litefast MOTION. A way of attracting even more attention is to make all of the content slowly revolve around the 360° display.

Litefast 360° Displays are made by Germany-based Kinoton GmbH, a leading designer and manufacturer of professional projection and display technology. For over 60 years, this well-established system provider with 160 employees and in-house engineering and manufacturing has been impressing professional circles with a steady stream of innovative technical developments. A worldwide network of competent sales and service partners ensures outstanding customer satisfaction. For more information about Litefast 360° Displays and Kinoton, please visit www.litefast-display.com and www.kinoton.com.