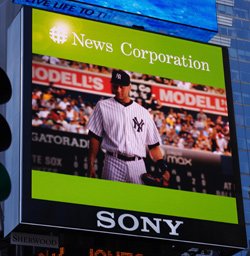 Daktronics Inc. (NASDAQ-DAKT) of Brookings, S.D., today announced its latest LED video project for Sony Corporation of America and News Corporation at New York City’s iconic One Times Square Tower. The new Daktronics-manufactured LED board was officially unveiled last Thursday, July 8th, and is certain to raise the eyebrows and grab the attention of New Yorkers and visitors alike.

“We are proud to add Sony Corporation of America and News Corporation to our respected list of large screen LED video clients in Times Square,” said Brad Wiemann, vice president of commercial business for Daktronics. “LED video advertising boards in Times Square are well known for being the largest and most dynamic in the world, and this new Daktronics’ display installation, and the technology behind it, will raise the bar to new heights for digital out of home advertising.”

Sony and News Corporation will utilize the display to bring interactive consumer experiences to an unprecedented level in Times Square.  For example, pedestrians could compete against each other in a real-time PlayStation™ 3 game broadcast live to the screen.  Members of the public can also see themselves displayed live in high-definition video or send text messages directly to the Daktronics-manufactured spectacular display.

Daktronics’ first Times Square project was the well-known Dow Jones, a News Corporation Company, Zipper display in 1986. Since that time, Daktronics has added more than 20 major projects to the world-famous area of New York City, more than any other LED display manufacturer. Some of the most well-known Daktronics projects in Times Square include the Coca-Cola® display, the Anheuser-Busch sign, and the Prudential display.

More information about Daktronics video displays can be found at: www.daktronics.com/spectaculars

Daktronics has strong leadership positions in, and is the world’s largest supplier of, computer-programmable displays, large screen video displays, digital billboards, electronic scoreboards and control systems. The company excels in the control of large display systems, including those that require integration of multiple complex displays showing real-time information, graphics, animation and video. Daktronics designs, manufactures, markets and services display systems for customers around the world, in sport, business and transportation applications.