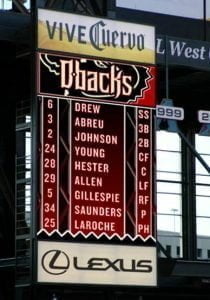 The Arizona Diamondbacks will be adding to their already impressive array of video and scoring technology for next season. Daktronics Inc. (Nasdaq-DAKT) of Brookings, S.D., recently announced they had been chosen to design, manufacture and install two large new light emitting diode (LED) displays at Chase Field.

“We have had such positive feedback from our fans about our Daktronics displays,” Derrick Hall, President and CEO of the Arizona Diamondbacks, said. “With these new additions, we truly have enhanced the fan experience for people attending games at Chase Field.”

Each new video display will measure approximately 36 feet high by 20 feet wide and show team lineups and advertisements. Daktronics displays incorporate excellent clarity and contrast of video images, multiple levels of protection from the elements and a more robust cabinet design with an improved ventilation system. Featuring pixels spaced at 20mm, the displays will allow even more possibilities for the D-backs to entertain the crowds at Chase Field with video, colorful animations, vivid graphics and eye-catching advertisements as they display the game day lineup.

This display will be added to an already impressive list of video technology at Chase Field, including one of the world’s largest high definition big screen displays installed in 2008. The 136-foot-wide, 46-foot-high display has the capability to display two, true high-definition, 16:9 images side by side. A ribbon display mounted to the second deck of seating, running from left to right field, was installed in 2006. Daktronics Sportsound® division updated the ballpark’s sound system later that year, and Daktronics had also installed the main scoreboard behind centerfield in 1998.

“We are very pleased to continue our partnership with the D-backs and the Maricopa County Stadium District,” Melissa Fjeldheim, Daktronics Sales, said. “Chase Field is already a great place to be on game day, and the new displays will add to the myriad of opportunities the D-backs have to interest their fans and provide the important information baseball lovers crave.”

About the Arizona Diamondbacks

Entering their 14th season in 2011, the Arizona Diamondbacks have won four National League West Division Championships (1999, 2001-02, 2007) since entering Major League Baseball as an expansion franchise in 1998. The D-backs also became the fastest expansion team to win a World Championship after defeating the New York Yankees in the 2001 World Series in only their fourth year of existence. The club has played in front of more than 34 million fans at Chase Field, which features a signature swimming pool and a retractable roof to keep fans comfortable in an air-conditioned facility during Phoenix’s hot summer months. The organization has also donated more than $17 million to non-profit organizations in Arizona since 1997 through its Arizona Diamondbacks Foundation and was named a “Best Place to Work” from 2007-10 by the Phoenix Business Journal and BestCompaniesAZ. To learn more about the D-backs, go to www.dbacks.com

Daktronics has strong leadership positions in, and is the world’s largest supplier of, large screen video displays, electronic scoreboards, computer-programmable displays, digital billboards, and control systems. The company excels in the control of large display systems, including those that require integration of multiple complex displays showing real-time information, graphics, animation and video. Daktronics designs, manufactures, markets and services display systems for customers around the world, in sport, business and transportation applications. For more information, visit the company’s World Wide Web site: http://www.daktronics.com, e-mail the company at sales [at] daktronics.com, call (605) 692-0200 or toll-free (800) 325-8766 in the United States or write to the company at 331 32nd Ave. PO Box 5128 Brookings, S.D. 57006-5128.