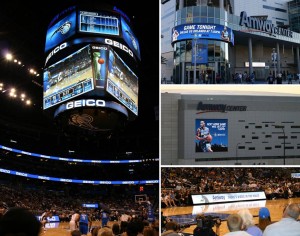 The Orlando Magic and their fans tipped off the NBA regular season last night at the new Amway Center. Among the many amenities of the Amway Center is a Daktronics (Nasdaq-DAKT) integrated super system, which includes numerous large screen LED displays and one of the largest and most capable suspended scoreboards in the world.

Daktronics LED technology is put to use throughout the building. Exterior digital displays provide incredible flexibility to reach fans and others passing by the Amway Center. The largest of the exterior displays is the Daktronics ProPixel® display that communicates with pedestrians and motorists driving by on Interstate 4. Inside the building, the system continues with even more amazing technology, including the unique centerhung configuration, 360-degree and 270-degree digital ribbon boards, six millimeter pixel digital scorer’s tables, and many other components.

“One of our goals was to make the new Amway Center the most technologically advanced facility in North America,” said Alex Martins, President of the Orlando Magic. “The unique system Daktronics delivered has helped us reach that goal. The feedback we’ve received from our fans has been incredible. They are simply awestruck by the LED technology in the building. The same is true for our corporate partners. We are able to provide them with some great opportunities for branding and interactivity with the Daktronics system. The ability to display synchronized content on all displays with the push of a button allows us to easily create incredible moments of exclusivity and brand the entire venue with a single sponsor’s message and imagery.”

The largest exterior display utilizes more than 5,000 Daktronics ProPixel® LED sticks, each a meter long, configured into a video display that measures approximately 46 feet high by 53 feet wide. The display has “a degree of transparency” because the LED strips have space between them, allowing spectators inside the building behind the display to easily look outside through the open space. Additional exterior displays include a curved digital sign on the lower end of the building’s signature tower, ticket window and parking garage displays.

Probably the most impressive component of the integrated scoring, timing and video system is the unique 40-ton centerhung configuration, which incorporates 18 different large displays using more than nine million individual LED pixels, to show high definition video and real-time data. The main scoreboard measures 42 feet high and 41 feet wide, making it the tallest in any NBA venue. Unlike other designs in use at sports arenas, the Orlando centerhung scoreboard uses high resolution six millimeter pixel technology on each of the 18 displays, including the two digital rings and four tapered corners, allowing for more creative programming options.

“From the beginning we worked closely with the Daktronics team to do some things that have never been done before,” said Charles Freeman, Senior Vice President of Business Development for the Orlando Magic. “The hardware and capabilities of the centerhung system are unique, with additional video processing power and video inputs that allow us to run different video simultaneously on each of the four main video screens, and even more impressive, is the ability to show a single massive video image on all 18 of the six millimeter displays on the centerhung configuration. Because each of the centerhung screens utilizes six millimeter pixel resolution, you don’t see different image quality between the screens. It’s a one of a kind scoreboard. The visual experience and the wow factor are definitely there.”

“This building is about the fan experience and sponsorship opportunities,” Freeman said. “And with the integrated Daktronics LED systems inside and on the building and the uniqueness of the center-hung scoreboard, it achieves both these goals.”

“We interviewed all the major companies throughout the world to put this unique system together, and we kept coming back to Daktronics and a system that was made in the USA,” Freeman added. “The fantastic Daktronics team has really been able to deliver what they promised.”

Additional displays located inside the venue include approximately 2,100 linear feet of digital ribbon boards, the largest being a 360-degree, 1,100 feet long display that surrounds the entire seating bowl.

Getting all this equipment to work together as an integrated system also takes some significant technology on the control side. The Orlando Magic game day staff uses Daktronics new Show Control System, along with the company’s world class video processing system, to create, size and control the video, animation, graphics, scoring, timing and statistical content that appears on the network of LED displays.

The Magic has a talented team in the control room to bring all this technology to life. That team includes individuals producing, directing, recording and queuing up instant replays, digital artists, and operators controlling all the different digital displays. Daktronics Keyframe® creative services group assists the Magic production team by producing high quality content to create excitement and activate sponsors. Keyframe® has produced an opening animation and Amway Center logo treatments, and is currently working on Magic-specific crowd prompts. The Keyframe® group will also be providing updates and new content throughout the season at the request of the Magic.

The Orlando Magic served as the developer of the new downtown Amway Center which will compete to host major national events, concerts and family shows. In addition to the Orlando Magic, the venue is also home to the Orlando Predators of the Arena Football League. The facility is owned and operated by the City of Orlando on behalf of the Central Florida community.

The Amway Center was designed to reflect the character of the community, meet the goals of the users, and build on the legacy of sports and entertainment in Orlando.

The building’s exterior features a modern blend of glass and metal materials, along with ever-changing graphics via a monumental wall along one façade. A 180-foot tall tower and spire serves as a beacon amide the downtown skyline. For more information visit: www.amwaycenter.com

Daktronics has strong leadership positions in, and is the world’s largest supplier of, large screen video displays, electronic scoreboards, computer-programmable displays, digital billboards, and control systems. The company excels in the control of large display systems, including those that require integration of multiple complex displays showing real-time information, graphics, animation and video. Daktronics designs, manufactures, markets and services display systems for customers around the world, in sport, business and transportation applications. For more information, visit the company’s World Wide Web site at: http://www.daktronics.com