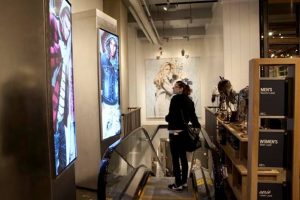 Shoppers may notice an increased number of electronic displays around them this holiday season—flickering advertisements that can change instantly and show video. Obviously, they’re meant to grab shoppers’ attention, lure them into stores, and encourage them to buy more. Retailers would like to know how well the signs succeed.

Absent solid information, many stores are hesitant to invest in electronic signage because installation and maintenance are expensive. A startup recently acquired by Intel could provide the analytics that retailers need to decide if these signs are worth the money.

The company, CognoVision, has developed face-recognition software that can determine a person’s gender and approximate age. This, along with cameras added to the digital displays, could give retailers a better sense of whether the ads are getting shoppers’ attention. The software could also become a new source of shopper demographics and enable advertisements to be tailored to the people looking at the screen. Within the next year, says Jose Avalos, director of digital signage at Intel, the chipmaker expects to have some “high-profile” stores demonstrating the technology.

Intel began focusing on electronic signage two years ago, Avalos says. “When we first started working in it, it was a very fragmented market,” he says. Last January Intel and Microsoft partnered to promote a platform for smart digital signs that include Windows software and Intel’s Core i5 and i7 processors. In November, NEC, a software and hardware company, joined in, supplying software to simplify content management across display systems.

With the purchase of CognoVision, Avalos says, Intel is putting energy into improving the analytics side of digital signs. “What’s needed is metrics and analytics about the effectiveness of signage,” he says. “We think this can promote adoption.”

Currently, there are 2.4 million large digital displays used in out-of home settings in the United States, says Chris Connery, an analyst focusing on the commercial display market at DisplaySearch, a research firm. By 2016, Connery says, the number of screens should reach 9.2 million. “It’s one of the fastest areas of growth in all flat-panel displays,” he says. “Everyone’s trying to crack into [the market] and replace Mylar poster boards with flat panels,” Connery adds, “But the ‘gotcha’ for the industry is metrics, and that’s what Intel’s trying to do.”

CognoVision’s technology includes machine vision algorithms that analyze facial features to generate demographic information. Cameras mounted next to a sign find the faces that are looking at the screen, and the software collects information on the size and shape of the face and the distance between features, and compares those data points with information previously categorized in a database. Within a range of certainty, the algorithm determines the person’s gender and age. This demographic information, not facial images, is stored and used by the retailer, stresses Avalos. “One of the things we’ve being very careful with is to make sure we address privacy up front,” adds Avalos.

The accuracy ranges from 85 to 95 percent, Avalos says, depending on the market in which the system is deployed. Databases have to be tailored to a particular locality. For example, in Japan, he says, the database would differ from that used in the United States. Avalos expects that as more data is introduced to the systems, accuracy will improve.

Simple demographic recognition is just the beginning, says Avalos. He foresees opt-in systems that recognize individuals’ faces. The customer walks into a grocery store, is recognized, and immediately given digital coupons via his cell phone—like a shopper loyalty program but without the card.

More near-term applications might include tracking shoppers’ actions. “If you have different advertisements pointing them in a direction, you’ll be able to track to see if they really go to that part of the store,” says Ashley Flaska, vice president of marketing for NEC Display solutions. She adds that interactivity with the display is also important—an idea with which others in the industry concur.

Display startup Prysm, which developed screens for American Eagle’s flagship store in New York City, hopes to integrate interactive technology into its displays, linking an item a shopper is holding with an advertisement on a screen. “It could be as simple as: I grab jeans … and up on the display there’s a special for those jeans or an advertisement with someone wearing them,” says Dana Corey, vice president of sales at Prysm.

For Avalos, interactivity is important “because it enhances the deployment.” It turns the act of looking at a display, even with other people around, into a one-on-one experience. Avalos says a number of different technologies might be used interactively—such as touchscreens, mobile phones, and gesture recognition—all the while the systems keep gathering metrics on who’s actually paying attention to which ads.