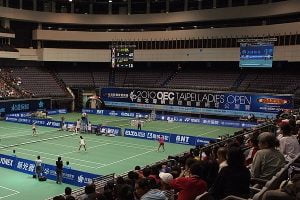 The organizer set up two LED screens in Taipei Arena and each screen was connected to one CAYIN digital signage player. Authorized staff operated these media players via network and controlled the content playback on each LED screen as well.

All live scores and figures were collected and managed by Heimavista’s sports game system. Through CAYIN’s digital signage players, live sports data from Heimavista’s system was presented on the LED screens swiftly and faithfully.

It was not easy to know the precise time of each tennis game, so the operation of LED digital signage was under the command of a director, who was responsible for content arrangement based on the onsite situation. Due to the powerful remote managerial functions of CAYIN SMP-WEB4 digital signage players, LED screens changed templates and contents immediately whenever a different playlist was applied.

During this tournament, every referee even updated scores via a PDA. Whenever a tennis player scored, the referee updated the data just by a simple click on the PDA. The PDA transmitted the data immediately to the web server and, at the same time, broadcasted the updated information onto LED screens via SMP-WEB4 digital signage players.

The full story can be downloaded from CAYIN’s website: http://www.cayintech.com/digital_signage_applications/cayin_digital_signage_seizes_attention_at_2010_oec_taipei-en.pdf

About CAYIN Technology
CAYIN Technology offers a complete portfolio of digital signage solutions including media players, servers, and software which are applicable to various industries, such as education, retail, hospitality, corporate, financial, and public institutions. CAYIN is dedicated to being a reliable partner to its clients worldwide, and has successfully set up various application references globally. In order to best facilitate the deployment of CAYIN products, the company also provides tailored services to satisfy the ascending market demand for almost limitless applications.