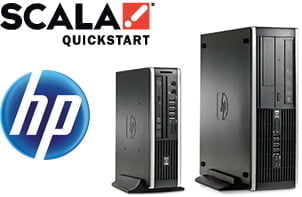 Innovative player setup offers a break-through in ease of use

Scala, the world’s leading software provider for digital signage networks, has announced a new release of Scala QuickStart supporting the introduction of new SignagePlayers from HP beginning December 6, 2010. The new QuickStart service offers a new and innovative “zero-configuration” scheme, allowing even entry-level users a way to set up and manage a Scala digital signage network with ease.

“Never before has setting up a full-featured digital signage player been this easy,” said Gerard Bucas, Scala’s Chief Executive Officer. “We’re incredibly pleased to introduce this new service in conjunction with the new Scala certified players from HP. We believe we have achieved a significant breakthrough for the industry.”

“The new system we created for setting up these QuickStart players is amazingly simple,” said Jeff Porter, Scala’s Executive Vice President. “Just plug it in, turn it on and enter a code that shows up on the screen. That’s it. No mouse or keyboard is required in most cases. You’ll be up and running in minutes.”

The HP SignagePlayer/Scala QuickStart solution(1) features a locked-down Microsoft® Windows® Embedded operating system and a preconfigured Scala Player for outstanding performance and reliability. Displaying videos, pictures, crawls, interactive Adobe® Flash, and ScalaScripts with dynamic text or graphics in any combination up to 1080p allows the system to be used in a wide range of applications. The HP SignagePlayers can also be easily connected to any Scala Content Manager anywhere in the world.

To get users started, a library of content and templates is included in the simple monthly fee for Scala QuickStart. To find out more, visit http://www.scala.com/hp