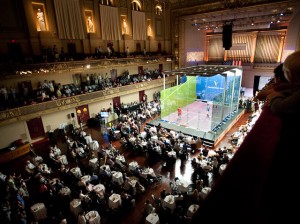 Aerva was proud to be an Enhanced Silver Sponsor at Showdown at Symphony which featured four of the best squash players in the world in a one-night, World Squash Champions Challenge at Boston’s historic Symphony Hall. Current World No. 1 Ramy Ashour of Egypt, 2009 World No. 1 Gregory Gaultier of France and 2008/07 World No. 1 Amr Shabana of Egypt, and 2006 World No. 1 Jonathon Power of Canada compete on a state-of-the-art glass court before an avid squash audience.

Aerva technology enabled the audience to participate in the event by sending in their photos, text messages and poll choices via SMS. Several large digital displays prominently featured Aerva’s suite of interactive widgets: Pic2Screen, Text2Screen, and Poll2Screen as well as sponsorship content. Aerva Twitter widget pulled the most up to date messages with #squashshowdown in it.

Sponsors enjoyed complimentary courtside, fine dining (Pops-style) while ticket holders gazed down on all the world class action from the Hall’s famous balconies. The evening’s fast-paced format ensures an action-packed experience as all players competed twice in a mini-tournament featuring shortened game scoring and shootout tiebreakers.

The single-game, bronze exhibition match introduced the evening’s guests to the first-ever “So, You Think You Can Ref?” mobile interactivity model. Each player was allowed two lifelines where they can ask the audience to use Aerva Poll2Screen to vote on whether they agree or disagree with the ref’s call. Shabana used his first lifeline on the first volley’s out call. An overwhelming 67% agreed with the ref’s call, giving Power the lead, 1-0.

Power wasted no time bringing the score to 4-0. Tightly working the T, he furthered his lead to 7-2. A stroke to Shabana had Power using his first lifeline and with the audience agreeing, he saved the point. Shabana’s fourth point was a deadly lob into the left corner just above the tin, starting what appeared to be a run. But an out ball gave Power a 9-4 lead. At 10-4, Power easily put out the lights out on the “So, You Think You Can Ref?” exhibition match, winning 11-4.

The crowd was captivated by the matches and sent in their comments to the digital screens using their cell phones and Aerva Text2Screen. One squash fan texted in, “if you thought THAT was contact, you haven’t played at the BRC!” People were joining the ongoing conversations on the screens.