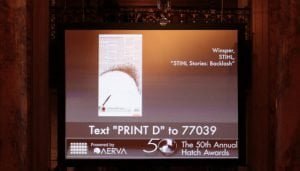 For the past 50 years, The Hatch Awards have been New England’s premier creative awards show. Aerva and the Ad Club celebrated this year’s winners and 50 years of creative excellence in advertising.

Aerva featured interactive digital technology on a gigantic three story screen including Pic2Screen, which allowed people to send in their own photos to be displayed on the screen. Aerva Poll2Screen ran two live SMS polls for people to vote for their favorite print and online ads. Results for the polls were displayed live all night in the beautiful Citi Performing Arts Center Wang Theater reception hall.

“Many local brands have been honored by the Hatch Awards over the past 50 years, including John Hancock, Liberty Mutual, Dunkin Donuts, Ocean Spray and Fidelity,” said Kathy Kiely, president of The Ad Club. “This year’s winners were honored for their traditional work, as well as for their creative work in digital, mobile, social media and web categories. While our platforms have changed over time, the marketing fact remains – ‘a great idea is great forever.’”

About the Hatch Awards – Fifty years ago, the leaders of the Greater Boston advertising community began the tradition of honoring their peers for creative excellence in their field. In choosing the title of this event, it was decided that it would carry the name of a person who was respected for the qualities for which the Advertising Club stood. That name was unanimously selected: Francis W. Hatch.