High-tech bus stops so cool they might actually entice you to take a ride will be installed next year in Florence, Italy.

The urban fixtures have been designed by a group of researchers led by Carlo Ratti, head of the Senseable City Lab at the Massachusetts Institute of Technology.

The EyeStop is a touch-screen bus shelter that monitors environmental conditions and real-time bus movement and also provides information and communication tools that can interact with your cell phone.

The EyeStop, which has touch sensitive e-Ink screens as well as LEDs, features a bus map plotting locations in real-time, e-mail and Web access, tools for planning a best route and getting directions, a community bulletin board, and, of course, a place for silent video advertisements. It will also use sensors to monitor and display local air quality.

Riders can choose to have their local EyeStop bus stop sync with their cell phone. The EyeStop you normally frequent, for example, could twitter you that your usual bus is running late that morning.

Intended for tourists as well as locals, the EyeStop tools will be accessible in several languages.

A bus pole version of the EyeStop with similar mapping, info, and communication tools will also be introduced. It glows brighter as the next bus nears the stop to signal pedestrians from afar.

The design for the EyeStop was unveiled this week at the Genio Fiorentino festival in Florence, and a prototype will soon follow.

Florence residents will start testing the high-tech bus stop’s usefulness, durability, and limitations in October. Following that, about 200 bus shelters and 1,000 bus poles are expected to be installed next year. The EyeStop was developed by Ratti’s project team, in collaborartion with the Province of Florence and Florence’s local transportation authority.

The bus shelter and bus pole versions of the EyeStop will power themselves with solar energy, but they won’t be one-size-fits-all. 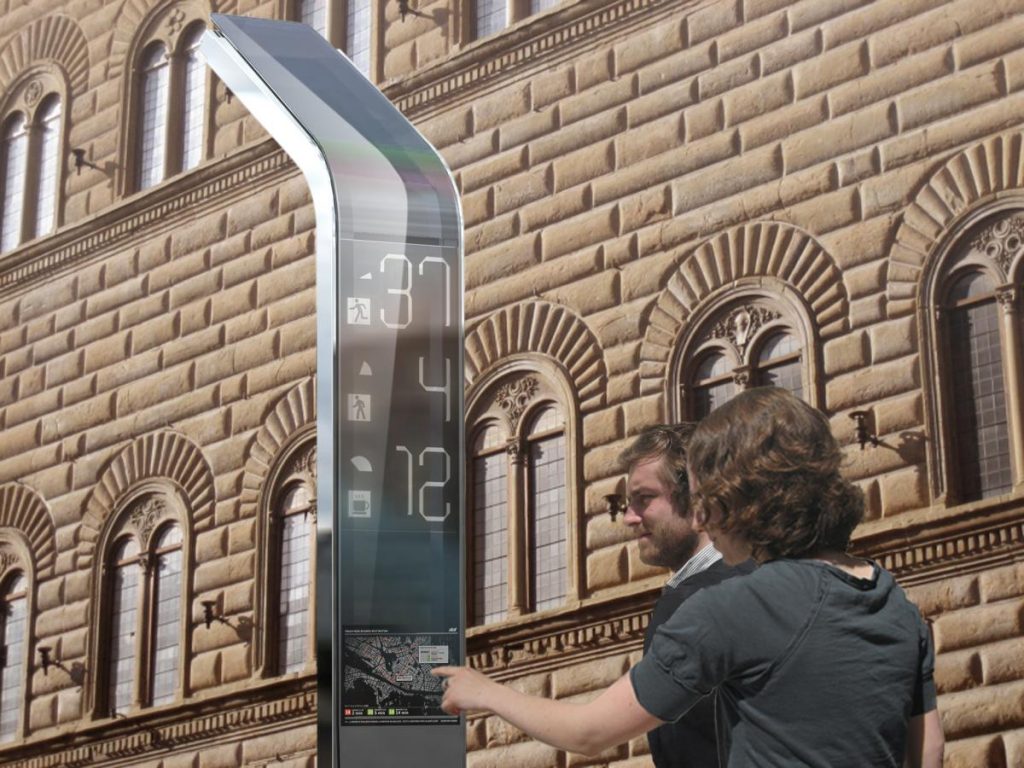 Each EyeStop will be customized by a computer program that takes into account the stop’s immediate surroundings. As a result, each can be built to fit into the existing space using steel, glass, and gray stone local to Florence. The software also considers maximum sunlight exposure for the location to determine power generation needs.

But is it graffiti proof?

“We have looked into special glass surfaces that are self-cleaning and graffiti proof,” Ratti said in an e-mail. “However, we will perform some real tests before building the prototype in October.”