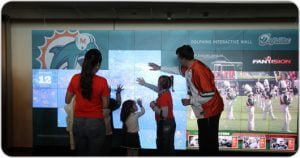 Miami Dolphins fans are the first in professional sports to literally get their hands on a unique, interactive-multimedia display, featuring Christie® MicroTiles™, now running on the club level of Sun Life Stadium.

Corporate sponsorships are designed directly into much of the Dolphins Interactive Wall’s content, making those brands part of the fan experience. Between on-demand Top Dolphins Moments, for example, viewers have fun wiping away virtual sea bubbles embedded with sponsor logos while dolphins swim in a virtual tank created by the Christie MicroTiles’ virtually seamless display blocks. Watch a video of this wall in action.

The first of its kind in pro sports, the Dolphins Interactive Wall debuted Nov. 14 at the Dolphins-Tennessee Titans game.

The Dolphins Interactive Wall is a customized version of The BuzzWall™, developed by Christie, recognized as one of the world’s most innovative visual display companies, and Montreal-based Arsenal Media, recognized worldwide as a leader in digital media for unique applications.

“Technology really provides us with the flexibility to have Sun Life Stadium take on the personality of the event and tailor it to that particular experience,” continues Howard. “Elements like The BuzzWall are a great example of how fans can come into this stadium for a University of Miami (UM) game and see it very well branded as UM, and the next day, we can have a Miami Dolphins game and easily change the branding. Offering a fully integrated experience is extremely important to our tenants, our marketing partners, guests and us. This is why technology such as Christie MicroTiles appeals so much to us.”

Arsenal Integrated, the multimedia R&D wing of Arsenal Media, is a creative production and strategy firm. Part of Christie’s lead creative team, the marketing and engineering groups of both companies planned and executed the global product launch of Christie MicroTiles in late 2009.

“The reaction from fans has been very positive, and we’re seeing people not only drawn to the wall, but staying to play with it,” says Denys Lavigne, president of Arsenal Media. “The wall shows what’s really possible with digital signage – an application that’s completely targeted to the space, and its business and revenue opportunities. This is not something people just happen to notice and watch. It’s more intimate. The wall creates a relationship and a buzz that works for the fans, the team and its corporate sponsors.”

“What has excited me the most is how the wall speaks to all ages,” says Howard. “There is so much of a footprint on this wall you can attract all ages. We didn’t originally target the content at kids, but they were all over it. As a result of that, you would have the parents there as well, and they’re consuming other content at the same time. It’s a multi-tasked offering that speaks to different demographics and age groups.”

The Dolphins Interactive Wall is the latest innovation for one of pro sports most tech-savvy franchises. The stadium has one of the largest hi-definition video boards, and one of the longest LED ribbon displays in all of pro sports. The Dolphins were the first sports team to deploy virtual videoconferencing, and have more than 1,500 HD displays operating around the facility, showing supplemental information for fans and digital versions of menus in the concession areas. The team also uses and markets a wireless handheld game-day TV service called FanVision.

“The launch of the Dolphins Interactive Wall was something of a first birthday celebration for Christie MicroTiles, and we can’t imagine a more powerful demonstration of what’s possible with this new display technology,” says Kathryn Cress, vice president corporate & global marketing, Christie. “The Dolphins have demonstrated a lot of vision in going well beyond the pure ‘Wow’ factor of the tiles, and exploring the business benefits, which are numerous.”

Christie Digital Systems USA, Inc. is a global visual technologies company and is a wholly-owned subsidiary of Ushio, Inc., Japan, (JP:6925). Consistently setting the standards by being the first to market some of the world’s most advanced projectors and complete system displays, Christie is recognized as one of the most innovative visual technology companies in the world. From retail displays to Hollywood, mission critical command centers to classrooms and training simulators, Christie display solutions and projectors capture the attention of audiences around the world with dynamic and stunning images. Visit http://microtiles.christiedigital.com for more information about Christie MicroTiles used in this installation.