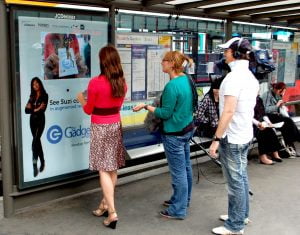 Interactive posters at bus shelters, digital games on poster sites, a Gadget Show ‘studio’ at a bus stop and a giant 2D image of Suzi Perry towering over the city are among the futuristic techniques deployed by Outdoor market leader JCDecaux to turn Manchester’s Piccadilly Gardens into a Gadget Show Zone. In a UK first, ‘Augmented Reality’ posters will create a ‘virtual’ Suzi Perry, using technology from Total Immersion and Hidden Creative.

The results of the challenge and judging criteria will be under wraps until the show airs on 2nd August on Five.

Sam Bird, Director of Creative Solutions at JCDecaux said, “Outdoor advertising suits the way we live our lives today – because we spend 53% more time out of home now than we did 14 years ago, commuting for longer and socialising more. As this showcase demonstrates, advances in technology have brought Outdoor closer to the world of “The Minority Report’ with the advent of interactive posters and cutting-edge technology such as ‘Augmented Reality’.”

Myles Peyton, EMEA Sales Director at Total Immersion said, “We are delighted to be working with The Gadget Show and JCDecaux on this groundbreaking project. The big strength of AR over ‘traditional’ advertising is that the consumer changes from being a spectator to become part of the experience. It taps into the Facebook, Generation Y target audience. Everyone wants to be famous and through AR, consumers can become an actor and participate with this compelling technology at a place of their own choosing, whether that is online, in the bus shelter, at a conference, event, or exhibition,”

Matthew Trubow, Marketing Director of Hidden Creative said, “We are delighted to receive this opportunity to work with Five and The Gadget Show as we continue to enhance Hidden’s portfolio within broadcasting and publishing sectors. This has been an exciting project from start to finish and we are pleased to have achieved a polished end result with a fantastic group effort from the people at Five’s The Gadget Show and JCDecaux”.