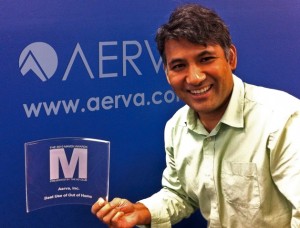 The Ad Club presented its annual The Maven Awards at the Hynes Convention Center during its Media Innovation Day. Aerva, Inc. and its Picture-to-Screen application running at Kodak’s outdoor LED billboard in Times Square won the “Best use of Out-of-Home” category. News Anchor David Wade was the emcee for the awards ceremony.

Attendees from the industry cheered for the winners. This year the nominations grew to over 80 entries for this category making competition fierce and Aerva thanks the judges for their consideration and choice.

Best use of Out of Home
This award recognizes outstanding and creative use of out of home media. The Maven Awards Jury defines “Out of home” to include: billboards, public transit advertisements, mobile billboards & digital billboards.

During Media Innovation Day, event-goers got the chance to try out some of Aerva’s technology. A large screen was in the lobby featuring Aerva’s suite of interactive widgets: Pic2Screen, Text2Screen, and Twitter Widget as well as sponsorship content.

After the Maven Awards ceremony there was a cocktail hour to kick off the Ad Club’s Media Auction.