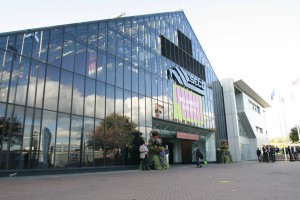 The Scottish Exhibition and Conference Centre (SECC) has multiple exhibition halls that are rented out to a wide range of clients. Content had to therefore be changed daily or weekly for multiple halls to advertise the various events. They wanted to install signage that was more eye catching and sophisticated than traditional print for light boxes, and at the same time cut costs.

Before ONELAN digital signage was installed, each hall had a designator sign which SECC supplied as part of each client’s contract. These showed details of the relevant event on backlit fluorescent signs and comprised rudimentary graphics with the occasional logo for an additional charge. SECC had a company that produced new signs for every event, at an annual cost of around £35,000.  The event signage is part of the client contract and as such a cost to SECC.

The exhibition centre decided to introduce digital signage to both save money and simultaneously improve the impact of the exhibition hall displays.

They already had ONELAN digital signage installed in the concourse running eight displays around the building, and they already have someone who manages the content for this, so the decision to use ONELAN for replacing the backlit signs was straightforward.

Twelve ONELAN 500 subscriber Net-Top-Boxes (NTBs) and one ONELAN NTB 5000 publisher unit are installed. In each exhibition hall, a ONELAN NTB 500 operates as a subscriber unit running 65” plasma screens above each main door, and two smaller 50” portrait screens above the smaller side doors, that can all show PowerPoint and play videos.  For each event, the client is offered two slides as standard with an additional charge for any additional slides.

The signage for each event is more detailed, eye catching and looks better generally.  The graphics for each event can be more sophisticated and changed seamlessly for the next client using a given hall. With the old system of backlit fluorescent signs, there was a considerable time lag between the end of an event and the installation of new displays for the next.

In the box office ONELAN digital signage is used for displaying events and queue information.  More recently another system has also been installed showing train times.

SECC are very happy with ease of use of their ONELAN digital signage and the fact that it is so easily monitored and cost effective; within two years the signage will have paid for itself.

ONELAN develops network appliances for standalone and end-to-end Digital Signage network solutions. The Net-Top-Box is a mul­timedia, multi-zoned solution capable of Touch Interactivity. With a browser based user inter­face, the system is fully multi-lingual and capable of dis­playing both stored media and live media e.g RSS feeds, webpages and broadcast TV or locally streamed video. Further mem­bers of the product family cater for Enterprise network management and integration with external data sources.

ONELAN’s NTBs are now installed in a wide variety of organisations such as retail, schools, hospitals, and government buildings, as well as some well-known corporates such as Vodafone, Virgin Holidays and PricewaterhouseCoopers.

ONELAN Ltd is based in Henley-on-Thames, Oxfordshire.