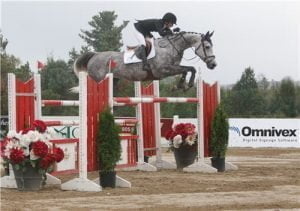 Omnivex Corporation, Microsoft Gold Certified Partner and provider of enterprise-level software for digital signage networks, announced that once again, their software will be used at the Canadian Show Jumping Tournament (CSJT) to manage a network of informational display boards. Omnivex Moxie software will manage digital content on LCD screens at the equestrian park to provide riders and spectators with real-time scoring and competition results. This is the second consecutive year that the tournament has utilized Omnivex software for a digital display system.

The CSJT is being held at the Caledon Equestrian Park, future equestrian venue for the 2015 Pan American Games/Para Pan American Games. For the CSJT, screens have been positioned in the VIP area, Champions Club lounge and in the public pavilion to present live video streaming from the rings and real time results as the competition takes place. It will also be used to display schedule information and other important messages to the many spectators and visitors at the venue.

Omnivex, in conjunction with Ram Equestrian, is the presenting sponsor of Phase 3 of the $100,000 Caledon Cup. Phase 3 will award $50,000 in prize money to the top ten horse and rider combinations. Canadian Olympic silver medal team members Ian Millar, Mac Cone and Jill Henselwood will be competing at the CSJT, as will Yann Candele and Jonathon Millar, both members of the Canadian Show Jumping Team for the upcoming 2010 World Equestrian Games in Lexington, Kentucky.

Omnivex software is used to manage display networks in numerous and varied sporting venues. Notable recent deployments include Portland’s Rose Garden Arena, Maple Leaf Sports & Entertainment’s Air Canada Centre and at the FIVB Volleyball World Championships in Norway. “Omnivex software is ideal for managing digital signage networks in sporting venues due to the fact that the software functions in real time and makes managing a large scale network of any type much more simplified,” said Jeff Collard, president of Omnivex. The software provides customers with the tools to display dynamic, eye-catching content to their audiences, when and where it is desired.

The tournament aims to raise money for the Children’s Wish Foundation of Canada. Over the past years of the CSJT, hundreds of thousands of dollars have been raised and numerous children have been awarded special equestrian wishes. The 2010 CSJT will have over 800 horses competing for over $200,000 in prize money. The tournament culminates with the $50,000 Caledon Cup Phase 3 on Sunday, September 26, at 2 p.m.

About The Canadian Show Jumping Tournament

Since 1986, the Caledon Equestrian Park has been operated by Equestrian Management Group in partnership with the Town of Caledon and the Toronto and Region Conservation Authority. Set against the backdrop of the Niagara Escarpment, numerous Olympic, World Championship and Pan American Games selection trials for Canada’s show jumping and dressage teams have been held at the Caledon Equestrian Park. For more information about the Canadian Show Jumping Tournament, visit www.equiman.com.

Founded in 1991, Omnivex Corporation is a leader in software development for digital signage networks and electronic displays. Omnivex software is used by over 2,000 customers, including many Fortune 500 companies, to manage all aspects of digital signage networks, including content management, real-time data acquisition and distribution, and remote device monitoring and management. Omnivex and our customers have been recognized with numerous awards for excellence in digital signage. For more information, www.omnivex.com.