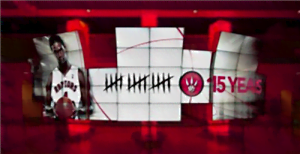 Omnivex Corporation, Microsoft Gold Certified Partner and provider of enterprise software for digital signage networks, announced that for a second consecutive year, one of their customer’s installations has been announced as the winner of Sign Media Canada’s National Sign Competition in the Digital Signage category. Maple Leaf Sports and Entertainment have been recognized with this prestigious award for their stunning videowall at the Air Canada Centre, which is powered by Omnivex Moxie software software.

The Air Canada Centre is owned by Maple Leaf Sports and Entertainment (MLSE). The facility is home to both the NHL’s Toronto Maple Leafs and the NBA’s Raptors, as well as host to major rock concerts and other events throughout the year. The videowall at the Air Canada Centre is located at the facility’s main gate. It sets the tone for the stadium’s atmosphere as it is the first thing that most fans see as they walk into the arena, given that sixty percent of all traffic (12,000 people) to the Air Canada Centre enters through Gate 1. The videowall is made up of 42 ultra-thin bezel LCD screens configured in a distinctive array and at different depths and angles. “We would like to congratulate MLSE for the vision they had for the digital signage system,” said Jeff Collard, president of Omnivex. “MLSE had clear goals that they wanted to achieve and set out to implement a plan to attain them. This award recognizes their hard work and ability to execute their plan,” he applauded. 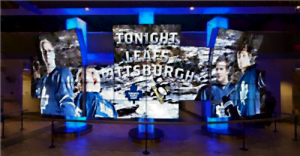 The videowall at the Air Canada Centre is part of a larger digital signage deployment which includes over 360 LCDs. All of the content on the screens is created, scheduled and managed centrally using Omnivex Moxie software. Depending on which event is taking place at the arena on a given night, the content on the displays and the ambient lighting changes to convert the atmosphere at the stadium from Raptors basketball to Maple Leaf’s Hockey or another event. The digital signage system went live in the fall of 2009 and was deployed by systems integrator, Digital Display and Communications. The intention of the digital signage was to provide a truly unique fan experience, while transforming the feeling at the 10 year old stadium. It is also a medium which lends itself well to providing advertising opportunities for sponsor branding, ultimately generating an increased revenue stream for MLSE and providing an excellent ROI.

This was the fourth annual Sign Media Canada National Sign Competition. Winners were selected from nine categories based on originality, creativity, appearance and design suitability. “The 2010 competition attracted many projects of extremely high caliber, representing the best of the best from all corners of the Canadian sign industry,” said Peter Saunders, Editor, Sign Media Canada. He continued “…submissions arrived from across the nation. Our judges reviewed a record number of eligible entries and their scores were tallied. All entrants deserve congratulations for the fantastic quality of their work.”

About Maple Leaf Sports and Entertainment

Maple Leaf Sports and Entertainment is one of North America’s premier sports and entertainment organizations. MLSE owns the NHL’s Toronto Maple Leafs, the NBA’s Toronto Raptors, MLS’s Toronto FC, the American Hockey League’s Toronto Marlies, Air Canada Centre and three digital channels — Leafs TV, Raptors NBA TV and GOLTV. Air Canada Centre is ranked as one of the top five entertainment venues in the world. It is home to Maple Leafs, Raptors, the Toronto Rock Lacrosse team and host to some of the best entertainers in the world. During its 10-year history Air Canada Centre has been recognized with more than 25 industry awards. For more information, visit www.theaircanadacentre.com.

Sign Media Canada serves the entire sign market, from designers and builders to printers and installers. Signs are the most visible symbol of corporate branding, and a critical part of every company’s success. Sign Media Canada is the premier source of information for the sign business in Canada. This is the third annual Sign Media Canada National sign competition. For more information, visit www.signmedia.ca.

Founded in 1991, Omnivex Corporation is a leader in software development for digital signage networks and electronic displays. Omnivex software is used by over 2,000 customers, including many Fortune 500 companies, to manage all aspects of digital signage networks, including content management, real-time data acquisition and distribution, and remote device monitoring and management. Omnivex and our customers have been recognized with numerous awards for excellence in digital signage. For more information, visit www.omnivex.com.