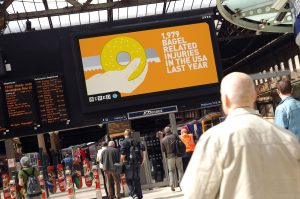 WIRED has signed a branded content deal with JCDecaux, with creative by Hurrell Moseley, Dawson Grimmer (HMDG), to engage the travelling public this August, using WIRED editorial across digital screens on roadside and in national rail stations. From 2nd August, consumers will be able to ‘top up their brain’ with a WIRED Index fact every day for a month, creating an appointment to view for commuters, and driving traffic to WIRED.CO.UK where they will have the opportunity to absorb more WIRED facts from the addictive Index archive.

In a media first, the branded editorial content will cover Transvision screens and digital 6-sheets at railway stations nationally, and on Primetime digital screens across London.

The creative delivers an opening frame of a pulsing brain, with the message “Get smarter with the WIRED Index”, then the fact appears on screen with a strong visual, and the closing frame directs people to “Top up your brains at WIRED.CO.UK”.

Jean Faulkner, Marketing Director for Condé Nast, comments “Making use of the clever, engaging content WIRED offers, this ‘brain food’ project will really stand out, making a connection with the WIRED commiteds, as well as introducing the brand to those ripe to be converted. Whether it’s our previous test of trust issue with the scratch off cover and accompanying station concourse experiment campaign, the July gaming issue that got hundreds involved online and on twitter, and now WIRED sharing a taster of its addictive content in a campaign that has the potential to achieve more than 35 million impacts, the brand continues to challenge and innovate.”

Greg Grimmer, Partner, Hurrell Moseley, Dawson & Grimmer (HMDG), adds “We have delivered a campaign for WIRED that again encapsulates all the brand stands for, and makes the most of its award-winning editorial. We have used digital outdoor formats since the launch of WIRED and this is our best work yet.”

James Power, Director of IDEA at JCDecaux, remarks “This branded content project with WIRED will create a dialogue with our travelling customers. It’s fantastic to see a brand using JCDecaux’s digital flexibility to bring updated daily facts to consumers when they are out and about in the summer. This will create a daily appointment to view and will drive the public online to WIRED.CO.UK to find out more.”

The WIRED Index is a regular feature in the magazine, with the magazine selecting startling figures to share every

month, such as 19.78% is the percentage of UK divorce petitions that cite Facebook as a factor based on a sample of 5000 divorces; 545 million being the number of connected mobile phones in India; 97.3% is the accuracy of Twitter chat in predicting new films’ opening-weekend takings, based on a model by HP Labs; and 100 is the number of lightning strikes that occur globally every second.

WIRED was awarded BSME Magazine Launch of the Year 2009, and Andrew Diprose, the Art Director, recently won the PPA Designer of the Year Award 2010.