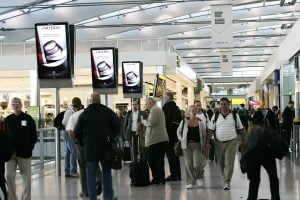 JCDecaux SA, the No. 2 outdoor advertising company worldwide and the No. 1 worldwide in airport advertising, today announced that it has been awarded the advertising franchise contracts with BAA, the world’s leading airport operator for Heathrow, Heathrow Express, Aberdeen, Edinburgh and Glasgow airports. The contracts were awarded following a competitive tender for a potential 8-year term.

JCDecaux Airport reaches 60%¹ of the UK’ airport audience, enabling clients to target an upmarket business and leisure audience in the unique environment of the airport. With 65.9 million passengers a year, Heathrow accounts for 30% of UK air travellers, making it central to JCDecaux Airport’s advertising proposition.

Julie France, Managing Director of JCDecaux Airport in the UK said, “This is a great win and we are delighted to have the opportunity to build on our established partnership with BAA. It will give our clients access to the most significant airports in the UK. Heathrow and Heathrow Express will cement our position as the No 1 choice to reach the premium international traveller. Our Scottish airports will play a key role as global gateways and are an intrinsic part of the local media marketplace.

Our offer focused on innovation, including the expansion of digital and the application of near-field marketing technology and augmented reality concepts. The contract comes at an exciting time for UK airports with the Olympics in July 2012.”

Hugh Fenn, Commercial Services Director, BAA Heathrow said, “BAA and JCDecaux Airport have had a highly successful partnership for many years and this relationship has seen the development of an extensive media estate across BAA. Our renewed partnership will continue to focus on improving the customer experience through the use of new technology, providing increasingly flexible opportunities for our media partners and further enhancing the digital estate.”

Key Figures for the Group:

– JCDecaux is listed on the Eurolist of Euronext Paris and is part of the Euronext 100, Dow Jones Sustainability and FTSE4Good indexes

– No.1 worldwide in transport advertising with 163 airports and more than 300 transport contracts in metros, buses, trains and tramways (380,200 advertising panels)

– No.1 worldwide for self-service bicycle hire