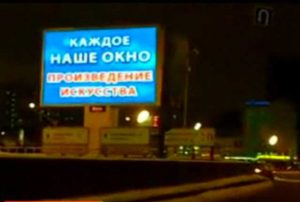 An enormous television screen showing a pornographic film caused a midnight traffic jam in central Moscow on Thursday as stunned motorists slammed on the brakes to gawk at the writhing naked bodies.

“They were either acting out of hooliganism or were from a rival company,” Viktor Laptev, commercial director of advertising firm Panno.ru, told RIA.

A short clip showing cars slowing to a halt to look at the screen sprung up on youtube.com and internet sites on Friday across Russia, a country which banned nudity on television before the Soviet Union fell in 1991.